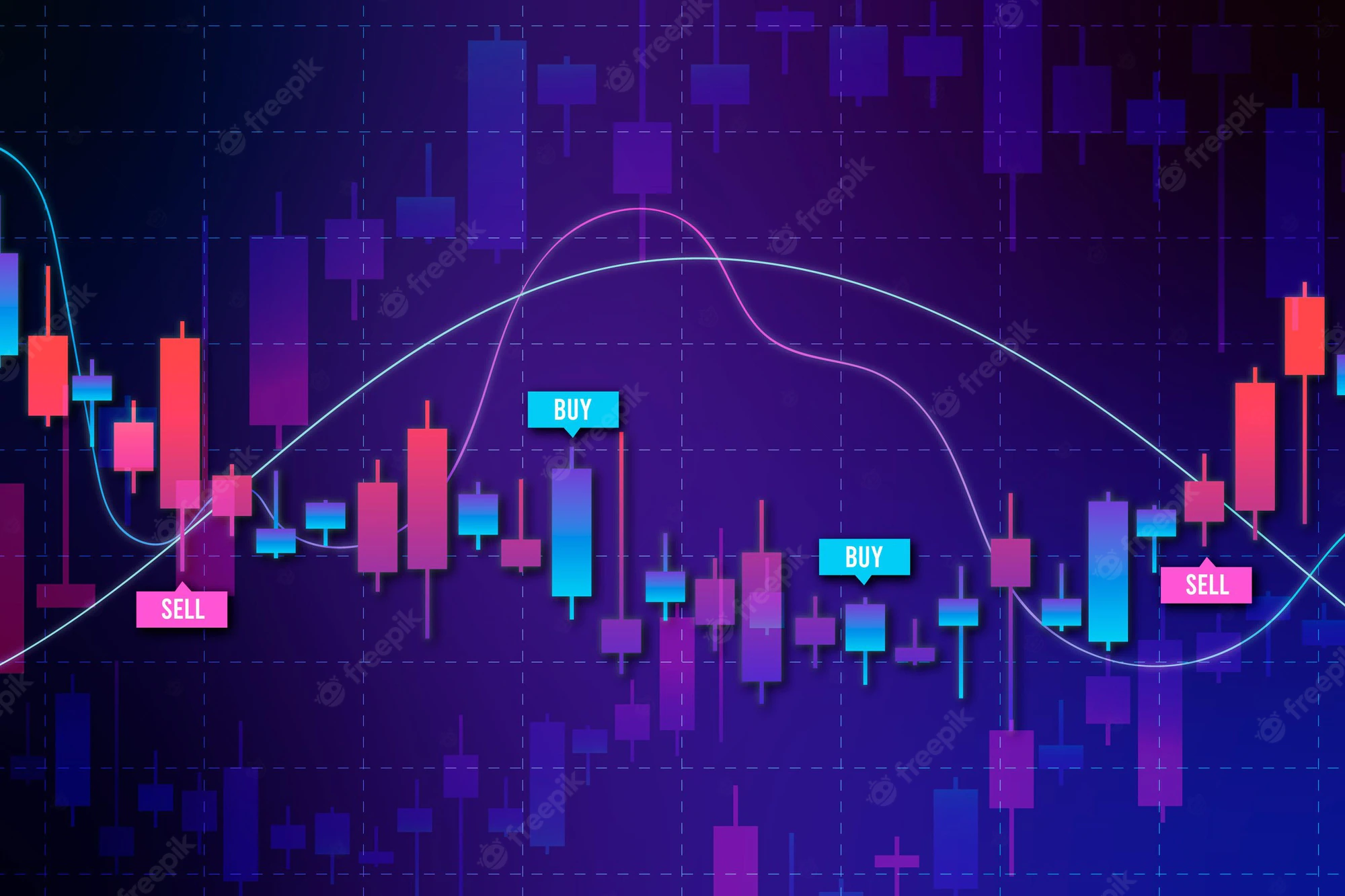 Volume Profile is one of the most popular pro trader’s tools for outlining the daily bias and those price levels that have good chances of triggering a reaction from the different market participants.

After reading this article, you’ll be equipped with the necessary introductive knowledge base to use the VP tool during your market analysis effectively.

What is the Volume Profile?

Volume Profile (VP) is a technical indicator visually representing the volume distribution over a timeframe on the price scale.

The resulting representation is somewhat identical to what is obtained through the Market Profile (MP), similar to a Gauss curve.

It is, therefore, possible to derive:

The main difference between MP and VP lies in the fact that the Market Profile is an alternative modality to the most popular ways to represent Price Action, like the Japanese candlesticks. While the Volume Profile is a supplement to the standard candlestick chart, something that can be put on top of it.

With the VP, the visual representation of the PA doesn’t change in any way, and it can be applied to multiple timeframes.

The Market Profile is strictly a 30-minute chart where each string of letters represents a 30-minute auction called TPO (Time-Price-Opportunity). Market Profile‘s levels are classically also derived by the distribution of price, not volume, across time.

To proceed, Let’s dissect further and define the elements in common between Market Profile and Volume Profile, starting from VAH, vPOC and VAL. 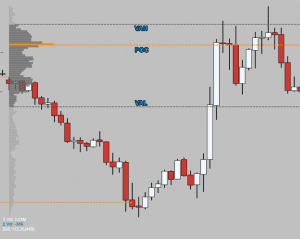 Value Area: price area where 70% of the volume were traded during the analysed trading session.

The higher boundary of the Value Area

Volume Point of Control: This is the price where the highest quantity of volume was traded during the analysed trading session, which can be an RTH session, a 24h session or a composite session, according to the trader’s preference.

The lower boundary of the Value Area

On top of the elements we can derive mechanically (VA and vPOC), the Volume Profile enables some semi-discretional analysis relative to the volume distribution. This kind of study brings in the following definitions:

It’s a point of the price action which shows a higher than average volume. Usually, it’s found halfway through a high-volume area (HVA). How the price behaves around these HVN levels, it’s similar to what characterises a vPOC. In fact, a vPOC is also an HVN, while the opposite is not necessarily true. In brief, it can be read as a fair price within the analysed timeframe and therefore accepted from the market.

It’s a point within the price action which shows a lower volume than average. Usually, it’s found at the extremes of a high volume area (HVA). At the early stages of a range formation, liquidity tends to aggregate around these levels since they’re perceived as “premium” or, on the contrary, as “discount” when compared with the price high volume price area definable as “accepted” from the market’s participants.

It’s a price area with a relatively high volume distribution. It shows the “acceptance” from the market, creating a range where the price is in equilibrium between zones of high passive liquidity that out-matches the aggressive trader‘s activity. The liquidity tends to aggregate at the extremes of these areas, and the price remains balanced until it gets dried or pulled out, remaining bound within the HVA in a rotatory fashion.

The name says it all: it’s a price area with lower volume distribution than average. It usually shows directional conviction and an unbalanced market with low liquidity, in control of aggressive traders.

The market tends to have long-term memory for LVAs and the inefficiencies that lie within them. Therefore the price tends to revisit these areas, flipping them progressively into HVAs.

Now, let’s consider the most common visual styles that VP traders use.

It’s the most classical style of Volume Profiling. This indicator draws a volume profile for each trading session, set on the entire trading day, including the overnight session by default. 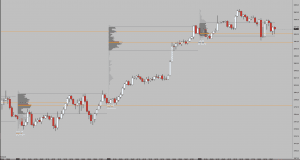 On this reported example on the ES chart, it’s possible to see how the price, each time it consolidates in a high volume area, is attracted by the previous session vPOC, reacting at both extremities of the last day’s Value Area. It also responds to the developing VAH and VAL as the day progresses toward the close.

Notice how the 23/06 trading session was relatively balanced, forming a clean “D” shaped volume distribution, but with a bullish bias. Price reacted to the previous day’s VAL and VAH, consolidating under this last level and skewing the volume distribution under a resistance with progressive lower liquidity due to the multiple testing.

During the 24/06 trading session, PA finds liquidity just over the previous day’s vPOC, pushing the price over VAH without seeing any residual liquidity left.

At this point, the price enters a state of imbalance, trending impulsively upwards, until new sell-side liquidity is found, entering into a new phase of acceptance and high volume consolidation.

This visual style lets one plot a single or more macro profile by joining multiple trading sessions into one profile.

Although it’s possible to derive price points like VA and vPOC from a composite profile, this kind of visualisation results more helpful in distinguishing high volume areas (HVAs) from low volume areas (LVAs) over a broad timeframe. 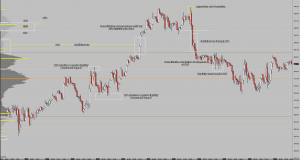 The composite profile reported in the example image covers 12 days of price action, showing the volumetric footprint behind what happened, enabling us to derive some valuable considerations.

Consolidation ranges tend to form wide high volume areas. At the extremes, we are aware that passive liquidity tends to aggregate; this is a mean reversion-prone environment, and it happens around what the market perceives as the “fair value“. At a certain point, however, the liquidity from one of the two sides will be thoroughly dried and/or pulled, setting up the price for a new state of imbalance, hunting for fresh liquidity.

Notice the distribution at the high of the trend in the shown example and the consequent bias change from bullish to bearish.

PA tends to dash through low-volume areas (LVAs), for then consolidate in those price areas where in the past, there were small HVNs, less developed than big vPOCs. A clear example of this can be seen in the price area around 3825.

During 24/06‘s session, PA breaks through the vast consolidation area around the vPOC, printing a small flag before proceeding again with a new impulse through a low liquidity area.

Then on 29/06, in the middle of the trend reversal, the price revisited the level mentioned earlier, spending more time around the previously relatively small HVN.

The upcoming chapters of this series will cover the fundamental points of Auction Market Theory (AMT) as well as the hints that we can take from the different volume distribution shapes, and at last, how to configure the Volume Profile on the VolSys trading platform.

The coaching material, courses and trading tools offered by Savius or its affiliates are intended for education purpose only. This information neither is, nor should be construed, as an offer or a solicitation of an offer to buy or sell securities or other financial instruments. You shall be fully responsible for any investment or trading decision you make, and such decisions will be based solely on your evaluation of your financial circumstances, trading objectives, risk tolerance and risk capital. Trading Futures, options on futures and retail off exchange foreign currency transactions involves substantial risk of loss and is not suitable for all investors. Past performance is not indicative of future results. You should carefully consider whether trading is suitable for you in light of your circumstances, knowledge, and financial resources. You may lose all or more of your initial investment.